Despite having a huge liking for mysteries, whodunits and stories where you have to unravel the clues apparently I’m not particularly good at reading cryptic signals in real life. My husband left me a string of clues like circa mid-nineties computer game Mist, which went completely over my head.

On Wednesdays I have an appointment I usually drive myself to, but this week my husband needed the car for some reason so he dropped me off. When I had finished I expected him to pick me up, but what I found was the car parked outside the venue of my appointment, unlocked and empty.

Puzzled I rang his mobile to find it buzzing on the passenger seat next to me. Wondering why any sane person with a modicum of intelligence and practicality would leave their phone in an unlocked car in a carpark, I put my key in the ignition, I am not one to hang around once I’m done with appointments and so I decided to drive home, leaving him with the use of his legs to walk back. I honestly thought he was indicating I should go and he’d follow on his own later.

Just as I was about to start the ignition, lo and behold my husband appeared at the entrance of the building I had just left and wore the most wounded expression on his face I have seen for years.

Apparently he was incredulous I would consider driving off without him as he had popped in to use the lavatory and the clues: unlocked car facing outwards, mobile and work folder left in car were all very logical clues that he was nearby, allegedly.

Not even entertaining the notion now that I would drive back from the appointment, as I could not be trusted to unravel messages nor extend him the courtesy of waiting for him whilst he is in the loo, he staked his claim to the drivers seat, making me climb over the central console, as he filibustered about me driving off without him.

I can’t understand why he couldn’t have text me he was in the building or at the very least had his phone on him so when I phoned he could’ve clued me in. Furthermore, I think its becoming increasingly important for him to see a urologist as he seems to need the loo everywhere we go. 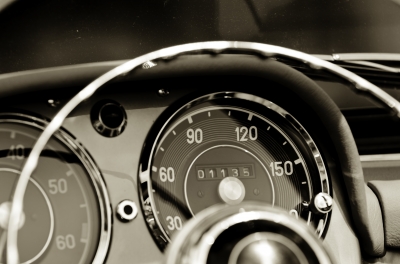 Image courtesy of Dan at FreeDigitalPhotos.net