‘Cover your webcams…or suffer the consequences.’ He calls himself the Slave Master. He spies on women through their computer webcams. Then he blackmails those who unknowingly reveal their secrets to him. His last victim was brutally murdered. Now he’s targeting the cop in charge of the investigation. To him she’s the perfect prey – because she has secrets of her own.

An absolute hidden gem! A taut crime thriller about a female Homicide Detective who is investigating the murder of a woman who was being blackmailed by a hacker. The Detective unknowingly is also a target of the hacker but did he kill the woman? Exciting but lacks the depth to be truly outstanding.

Lists of twists and turns and plenty of suspects. Definitely well written and worth a read. I think I may have to look into other books by this author too.

Against Her Will by Peter Martin

Rape is every woman’s worst nightmare, an act so vile, so devastating, it robs the victim of any sort of dignity, leaving scars that can last a. lifetime. Having family and friends rally round can make all the difference in the world. But without this support the victim may never fully recover.
Donna is such a victim. When she is brutally raped, her life comes crashing down, bringing with it memories of an unhappy childhood. Having lost everything dear to her, she almost succeeds in making the ultimate sacrifice, but for a young male nurse, who slowly helps her come to terms with the past. Just when she thinks she’s over the worst, she makes a horrifying discovery that puts her in mortal danger.

I would probably award 2.5 stars if half stars were permissible.

I had to mull over what I thought of this book as it had some very good parts, mainly the first chapter and the aftermath of Donna being brutally attacked in the Underground. This was atmospheric and well written but then the story takes turns which makes Donna seem a less strong character, not because she lacks resilience as a person but because her actions don’t seem plausible anymore and she has the worst luck in the world.

The rest of the book again challenges my perception of what is plausible in the scenario set by the author, the ending then picks up and is thrilling which is a surprise but tainted by the implausibility of what has come before in the story. I felt the author over-egged the pudding a bit in this book.

Despite the predictable ending, parts of this book are well written, there was a strong start but not sure I bought the twists and turns of this story.

Weeks in Naviras by Chris Wimpress

It’s late afternoon in the tiny fishing village of Naviras, where Eleanor Weeks is sipping wine and watching the ocean.

Even though she’s been there dozens of times, how she arrived that particular afternoon is a mystery to her. Until she remembers she’s the wife of the British prime minister, and that she’s just been killed in a terrorist attack.

As Ellie explores her personal afterlife, she recalls her troubled marriage during her husband’s rise to the very top of British politics. She remembers the tragedy and secrets which dominated the last ten years of her life, before recounting her role in a conspiracy which threatens to destabilise not just Britain but the wider world.

Both a political thriller and love story, Weeks in Naviras delves into the heart of a woman who sees first-hand the rise and fall of governments troubled by turmoil and crisis.

A most unusual and increasingly gripping book this political thriller and romance is a very good read indeed. The story of how Ellie Weeks met, married and grew distant fm her politician husband runs concurrently with an account of her emerging from the sea supposedly after death in a version of the hereafter.

Her death and many others attributed to a terrorist attack, but who and why planed the incident? On a journey where suspicions are high and the stakes are higher this political thriller keeps you guessing. 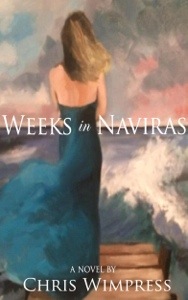 In Lethal Deception, Rose DeAngelo knows that insuring high-level shipments is a risky business, but when hijackers start lifting loads and injuring drivers and the string of thefts seems squarely targeted at her clients, she starts to feel the heat. Especially when all the signs point to her as the primary suspect. To investigator Mike Ramsey, it looks like a clear-cut case of an inside job. As the two are thrown together to find out who’s behind the dangerous crimes, each harboring doubts about the other, their suspicions mount even as an undeniable passion grows between them. But what neither of them realizes is that the hijackers are closing in, and Rose and Ramsey will be forced to trust each other and join forces or risk losing everything, including each other.

In Lethal Obsession, Kat Malone has always been a tough and focused undercover agent, and over the years she’s made a lot of enemies. Now one of them is back and stalking her viciously, bent on revenge. Proper and prudish Seamus O’Rourke has spent his life cleaning up the messes of his twin brother, Riley, and it turns out one of those messes is Kat Malone. Reluctant to help her but shocked by the depravity of her sadistic stalker, Seamus takes on the role of Kat’s protector. Forced into hiding following a deadly attack, tensions mount and passions flare as Kat is faced with the stunning depth of her stalker’s madness and Seamus must find the strength and determination to protect the woman he’s grown to love.

I preferred the second book to the first in this bundle. I found the first story a little too saccharin sweet with the characters not having as much depth to them. The second book Lethal Obsession appealed to me more as the characters were more flawed and it was a much more grittier story. The villain was more menacing and the suspense and fear was palpable.

Both stories are romances predominantly but the second one Lethal Obsession will appeal to fans of crime fiction much more than Lethal Deception.