I had a recent shuffle around of cat living arrangements here at our very own Bengal cat manor. I have 2 groups of cats living in our house and Tinky didn’t like the group she was in, which consisted of Nugget, Fliss, Dippy, Rambo Jr. and Fidget. I spend a lot of time with my cats and this blog post is my interpretation of what goes on. Having had Bengals for a while I know not to ignore or disregard their wishes, as it only causes more grief in future. So with that in mind I moved Tinky to the rag-tag team who roam my hallways.

The team out there consists of Basil, Sally, Victory, Fluffy and Bridgette. Basil being the only boy in the team “thinks” he’s in charge. I use the term loosely as I’m not sure that he actually does think or has the mental capacity to think. Sally loves everyone, the whole world and everything in it, Victory is selectively attentive and on her terms only as is her sister Fluffy, who is the smallest but cutest cat I have here and Bridgette holds her ground but doesn’t go looking for trouble.

Tinky’s addition obviously wasn’t going to go unnoticed by the team but I hoped the cats would be open to getting used to her. Initially most of the protesting and growling came from Tinky, when she didn’t have her mouth full in the food bowl, which wasn’t often. I suspect living with the greedy Rambo jr, Fidget and Dippy may have got too much for Tinky with their constant monopolisation of food and water bowls, despite there being a few, hence her insistence to be moved. Tinky being a girl who knows her mind and never one to back away from a challenge or perceived challenge growled, hissed and spitted so that her boundaries would become apparent to her new housemates. This had varying results.

Basil who I believe “thinks” ( again I confess I might be over-reaching here) he has his own harem despite being neutered for quite some time now, frequently likes to rub up against the girls and they wash him and fuss him as he does them. The fact that Tinky is not on these intimate terms with him doesn’t seem to factor into the calculations that go on in his mind when he decides that it’s appropriate to invade her space. Her resulting reluctance to have his nose in her bottom or within a foot of her causes him much bewilderment. Tinky is not stupid. Far from it. Basil is twice her size easily and she doesn’t strike out at him but voices her opinion, loudly and shrilly, but respectfully distances herself from a physical confrontation. Basil doesn’t take this rejection well and is emotionally wounded (when he remembers to be) by her constant rebukes. This results in frequent verbal confrontations during the day but no feathers have flown yet.

Basil refusing to take any sort of direction as I try to photograph him.

Victory knows what she likes and she definitely is no fan of Tinky, however by nature she isn’t much of a fish wife and deals with her feelings by keeping her distance and defending what’s most important to her, her food. I suspect Victory isn’t very brave as she has taken to slapping Sally when she’s annoyed rather than confronting the newcomer Tinky. Sally is an easy target as she is a pacifist and doesn’t strike back. However, it seems as long as her food is not interrupted, or God forbid her sleep, Victory will endure the inconvenience known as Tinky until she forgets that they are new acquaintances. This will probably take a couple of weeks and in the meantime I have trimmed her claws so poor Sally doesn’t get hurt. Tinky regards her with care and space but makes no apology for taking the bed by my bedroom door.

Fluffy is a quiet cat and I perceive her to be pensive and reflective of her behaviour. Being the smallest I think Fluffy is aware she needs to stand her ground more elaborately than the others. So bearing that in mind Fluffy has adopted the approach to slap Tinky every chance she gets. She doesn’t go out of her way to do this but if Tinky happens to be near she makes her point with her paws. It’s a quick slap and screech and she moves away. Fluffy also defends what is most important to her, her hammock bed. Although willing to share this with Basil, Victory and Bridgette, Fluffy draws the line at Sally and Tinky. Tinky mostly ignores Fluffy, but I think this may change as she settles into the group and may try to exert her dominance in future. 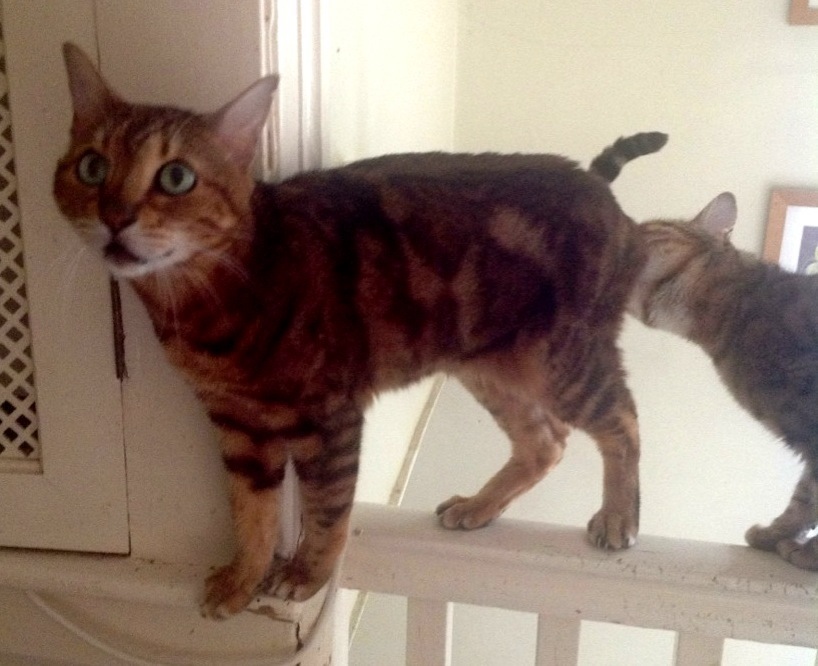 Fluffy, on the right, letting Tinky know in her own way that she’s invading her space and too close to her hammock bed.

Sally and Bridgette are mother and daughter and apart from the inconvenience of Victory slapping Sally for Tinky’s faults as she sees them, Sally isn’t to bothered with Tinky’s addition. In fact, I do wonder if she’s actually noticed? When faced with walking near Tinky Sally gives her a wide berth but other than that, she remains happy in the status quo. Bridgette is much the same, still getting on with everyone but not the complete pacifist her mother is, she goes through her days avoiding Tinky where possible. It’s very much like Sally, Bridgette and Tinky have discussed it and called a ceasefire…for now.

Left to Right Victory, Bridgette and Sally lying their ground.

Tinky’s old housemates have noticed that there’s more food but I’m not entirely convinced they realise she has moved out. I am keeping an eye on Nugget as he is Tinky’s old chum and I don’t want him to be upset by her decision to move, but apart from being a little more chatty I have noticed no real upset or sense of loss on Nugget’s part.

Dippy, Fliss, Rambo Jr. And Fidget are blissfully ignorant of the change and are happy to continue grooming each other while Fliss teaches them to attack and Dippy teaches them to swear and sleep.

Moving cats around especially bengals can be stressful but I am fortunate enough to have had these cats for a long time and to have the time to have gotten to know them well and observe them. This has made transitions here easier for all concerned. Time and patience goes a long way, it has been a week and my cats are settling fine with this minor adjustment.