This is the true story of a family drug business operated across international borders. Scott was named for his older cousin Adlai Stevenson, who was a former two-time Presidential candidate and American Ambassador to the United Nations. Scott recounts a roller coaster ride through the global counterculture of the 60’s, 70’s, 80’s and 90’s. It is a ride of flamboyant decadence and adventuresome lifestyle that eventually ends in homelessness and tragedy. It begins in his early teens when his first drug smuggling experience occurs at the self-seeking insistence of his older brother Ron. Over the course of nearly forty years, Scott travels the world inventing drug scams that continually outmaneuver the authorities. He evokes a hip, dangerous, fast-paced lifestyle by creating diversions that are unique and witty. He meets legendary artist Salvador Dali, entertainer John Belushi and such music icons as Jimi Hendrix, Bob Marley, Carlos Santana and John Lee Hooker. He survives on smuggler’s ingenuity, idiot’s luck and the love of exotic women. Scott’s story is infused with fascinating travels through the cultural landscapes of California, Hawaii, Europe, Morocco, Indonesia, Singapore, Bangkok and beyond. Ominously, this path leads down a twisted road of lies and deception. It is a story of loves forged and loves lost; of selfishness, greed, deceit, lust, love, revenge and sorrow. His story proves that there is no paradise for scoundrels. They all get ii in the end. This book belongs to anyone who has savored a well-told tale of adventure.

I’m not quite sure what to say about this book. I initially started reading it and soon realised it was a biography, not my usual fare, but then a few chapters in it got really interesting and I could not put it down. The story of Scott Adlai Stevenson’s life to date is very entertaining but its also like watching a car crash. You know it isn’t going to end well. However, by the time he fell in love for the 3rd time I did see a pattern emerging. I didn’t like David Bellamy, a much loved TV personality from my childhood, being maligned alongside others who had wronged Scott, but I have no proof for or against his story, so I take it like it’s intended as entertainment.

I recommend this book as I found it well written on the whole although a phrase about “walls being covered in shit, blood and faeces” comes to mind and there were a few grammatical bug bears I overlooked. Overall an entertaining read no matter how much you don’t relate to Scott. There’s no denying he’s had one hell of an adventure in life. 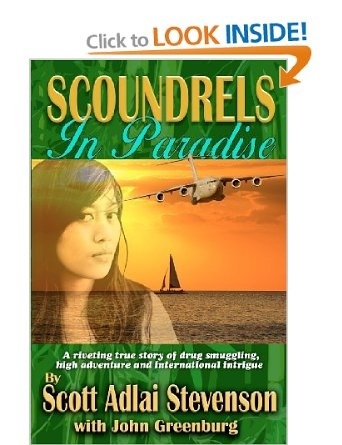